The Checkered Past Of Office Copiers

2019 marked the 60th anniversary of the first commercial office copier. Although the technology was ostensibly invented over 20 years before, in 1938, getting a truly operational machine wouldn’t happen until Xerox Corporation managed to develop the Xerox 914.

This first commercial model from Xerox was large, cumbersome and weighed nearly 650 pounds. Unlike even the larger office copy machines we see today, it was as big as two washing machines. But, despite its size and propensity for catching on fire, it began a revolution in duplication.

Way back on October 22, 1938, Chester Carlson used light, dry powder and static electricity he created with a handkerchief to make the first xerographic image, or copy. The process was eventually called xerography, meaning “dry writing.”

“Chester Floyd Carlson was an American physicist, inventor, and patent attorney born in Seattle, Washington. He is best known for having invented the process of electrophotography, which produced a dry copy rather than a wet copy, as was produced by the mimeograph process.”

This dry copy process was a radical departure from the existing common duplicating process, mimeograph. Many Baby Boomers can still recall the distinctive scent of mimeograph copies originating from the school office. Not that it was a pleasant odor, mind you, but it was distinctive and came from the sulfated castor oil that served as an emulsion.

The venerable old mimeograph machine that originated in 1886 was slowly being replaced during the 1960s by the upstart xerographic machine. The mimeograph process had become popular since it was far more cost-effective than traditional printing, one of the only reliable alternatives before xerography and the office copiers we know today.

Because there was no typesetting involved, just one individual with a typewriter and the necessary equipment could print numerous copies of an original document.

Ditto For the Spirit Duplicator

However, there was another technological hold out that came into being about four decades after the mimeograph – the spirit duplicator or, as many remember it: the ditto machine.

Using a process invented in 1923 by Wilhelm Ritzerfeld, these incredibly handy – and hand-cranked – wonders could produce about 40 or so good copies from one master before the copies gradually become paler. In the United States and most of the civilized world, the best-known manufacturer of spirit duplicators was the Ditto Corporation of Illinois.

And, much like the Xerox Corporation and their office copiers, the Ditto Corporation brand name became a generic name for spirit duplicators in general.

[William Ritzerfeld’s Patent Drawing for his Process for Multiplying Records]

These spirit duplicators, or Ditto machines, were used along with the mimeograph mainly by schools, churches, clubs, and other small organizations. Despite the limited number of copies one could make from an original, the reasonable image quality along with the low cost of copying made it a popular machine.

Ditto “purple” became a staple color of print in thousands of schools and other organizations in the last half of the 20th century. Along with the familiar odor of methyl alcohol that became associated with ditto copies for millions of schoolchildren.

What may seem to be a technological reversal of sorts, inkjet printing came into being long before PCs, but in a limited role.

The concept of inkjet printing originated in the first half of the 20th century, with the technology being more fully developed by the early 1950s. In the late 1970s, inkjet printers were being made that could reproduce digital images generated by computers.

Essentially, inkjet printing uses a process to recreate a digital image by propelling droplets of ink onto paper and or plastic substrates. With the development of “all-in-one” machines, inkjet printers serve as office copiers as well as printers and fax machines.

The advent of the all-in-one inkjet printer also meant that “office copiers” were now affordable for the small business owner as well as consumers at home. The rise in demand and the reduction in size of the average machine decreased the costs and increased affordability.

By the 2010s, these machines were routinely selling for less than $100.

While that may sound like a description of the film Cowboys and Aliens, those are actually the key elements of laser printing, the newer, “hipper” version of xerography.

An entry at Wikipedia tells us that,

“As with digital photocopiers, laser printers employ a xerographic printing process. Laser printing differs from traditional xerography as implemented in analog photocopiers in that in the latter, the image is formed by reflecting light off an existing document onto the exposed drum.”

The process was invented at Xerox PARC, the research and development company in Palo Alto, California that was originally formed as a subsidiary of Xerox. In 1973 the Xerox 1200 became “the first commercial laser printer” in the world.

And history was made once again.

By 1984, when the first Hewlett-Packard LaserJet printer was developed, the simple task of “making a copy” took on a whole new dimension. And the humble office copier had now entered the digital age.

Office copiers are still quite ubiquitous and the need to make copies has not diminished despite the prevalence of digital formats for documents.

According to a product review article at Business.com,

“Despite being in the digital age, there are still reasons why businesses should invest in a multifunction printer. Not every customer or partner wants to receive digital records. Also, technology fails at times. Those moments can put your business in a tight spot. It’s always a good idea to have hard copies available in case of tech emergencies. A good quality, multifunction printer and copier can produce the documents your business needs efficiently so no time is wasted.”

While we may still think of these modern version as mere “office copiers”, more often than not they actually multifunction printers (MFPs) or multifunction copiers (MFCs), which are also called all-in-one printers.

These “office copiers” not only copy, print, fax and scan, but users can print digital files and create copies from the same machine.

And the evolution of office copier technology continues! 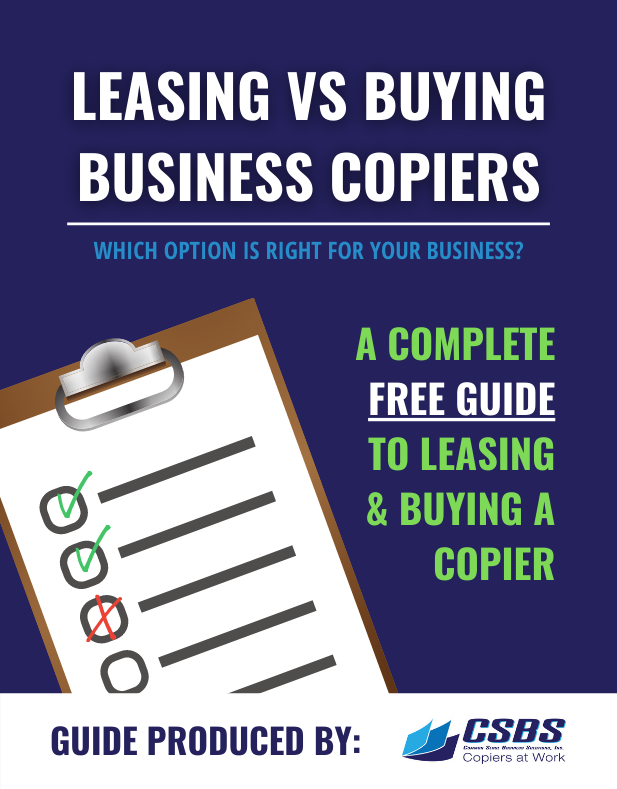